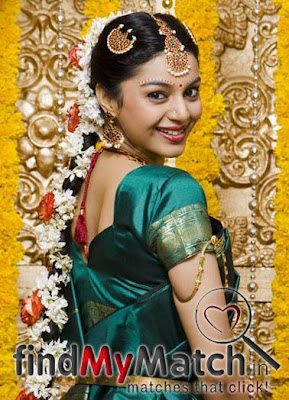 Nandi:: This is a ritual performed to ensure that the marriage takes place without any hindrances and goes on peacefully even if there is a death or birth on either side. The first wedding card is placed before the Lord along with coconut, aarti and a kalash.

Kaashi Yatre: This is a traditional playful ritual in existence since yore. The groom pretends to be angry as nobody is bothered to search a bride for him. He announces Brahmachara and leaves for Kasi on a pilgrimage like a true sanyasin. He carries a walking stick, an umbrella, a fan and a coconut, a small packet of rice and dal and also a dhoti. At this juncture his maternal uncle intercepts and convinces him and puts forth the bride he has chosen.

Dev Karya: This ritual is normally performed on the day of arrival of the groom's family to the village or the place the marriage is being conducted. The goods used for the wedding are placed before the Lord Ganesha and blessings sought. The bride and the groom are applied with 'haldi', a paste of turmeric on their bodies and this is considered auspicious. The 'uddin murth' grain which is considered sacred is ground.

When the groom and his retinue reaches the venue, the married women, the 'sumangalis' from the bride's party perform an aarti. They then lead the bridegroom inside the wedding hall.

Mandap Puja: This is in fact the first ritual that is performed on the day of the marriage. This Puja is for the Mandap or the marriage hall to be rendered appropriate for the wedding. The Var Puja is a ceremony performed when the bride's father brings the groom to the Mandap. The ceremonial washing of the groom's feet by the parents of the bride takes place and a silk dhoti and pitambar is offered to the groom to adorn him for the wedding. It is the usual practice that none should see the face of the bride when she is brought to the Mandap. So the bride's face is shielded by peacock feathers.

Giving away of the bride: 'Dhare Herdu' symbolizes handing over their daughter to the groom. The bride's father takes the groom's hand and places it on the hand of the bride. The groom then holds the bride's hand along with coconut and betel leaves while her father ceremonially pours water into the groom's hands signifying 'dhara' that now she belongs to the groom. Puffed rice is then poured into the haven five times before the seven pheras or the saptapadi begins.

Saptapadi is the actual wedding ceremony of the bride taking the groom's footsteps seven times around the holy fire 'sapta padi'. The groom's angavastram and the bride's pallav are tied with a nuptial knot.

In the Kannada wedding, five women tie the Mangalsutra or the holy thread while the bride groom holds it around the neck of the bride. The couple bows before the elders and seek their blessings.

In some kannada weddings, a game called Okhli is generally played with the groom's wedding ring dipped in a vessel containing colored water. The bride and her brother search for the ring thrice.

Post wedding rituals
Vidaai ceremony symbolically refers to the tearful farewell of the bride from her maternal home to her in-laws house। The bride's parents shower her with numerous gifts including an umbrella, vessels, cot and other items to enable her set up her new home.

Graha Pravesh is the ritual of the bride entering her new home. She kicks a kalash full of rice with her right foot kept at the entrance of the groom's house. This ritual signifies that her arrival is bound to bring prosperity and she enters a new phase of her life. The name changing ceremony follows. The groom decides on a name for his bride which he inscribed with a ring on a plate containing rice.

PINKY
No words need spoken , I said them all in the silence" .. This is Pinky ... I have completed M.phil. and doing a job at a school .. Well I guess I am an ordinary person - sensitive and proud , childlike and grown-up , foolish but wise . According to me some beautiful moments in this world are - love , peace , hope , faith , courage , ability , affection , admiration , confession , happiness , true knowledge , wise expression , wonderful thought and mercy . It would be my pleasure if I can share my inner thought and outer life through my blog . I am thankful to my life and God to be able to share it with my family and friends ... Think Most , Feel Noblest , Act The Best ...